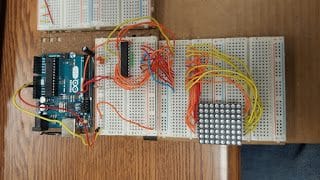 I popped the MAX7219 and 8×8 LED Matrix from the kit and made it a little more social (watch video to see what I mean).  Using the MAX7219 requires only 3 pins from the arduino, a couple capacitors and resistor.  All the multiplexing is handled by the chip.  When writing to the device you shift […] 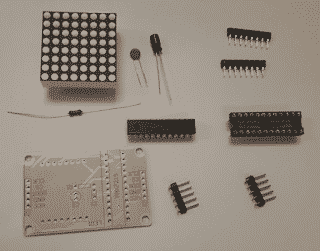 After reading up on Project #21: Creating an LED Matrix in The Arduino Workshop I set out to find a 8×8 common cathode led matrix.  I saw this MAX7219 8X8 Red Dot LED Matrix on Amazon and while I was looking to experiment with using two 74HC595’s to control the rows and columns of the 8×8 […] 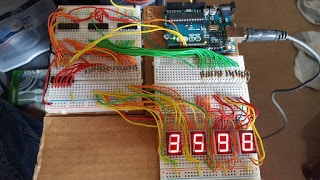 My last experiment was with the three 74HC595s I was using to create the Knightrider effect on 24 leds. In this experiment I am going to add another 74HC595 and use all four to control four common-cathode seven-segment LED displays. 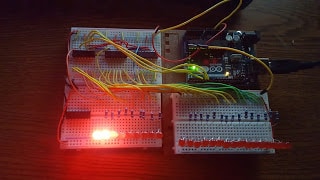 Connected three 74HC595s in series and entertained myself by simulating KITT from Knightrider. Would have hooked up the fourth one but was running out of realestate and LEDs. I should have a another breadboard in a few days along with some 7 segment leds that I will be hooking up and controlling with the 74HC595s.

Serial to Parallel Shifting-Out with a 74HC595 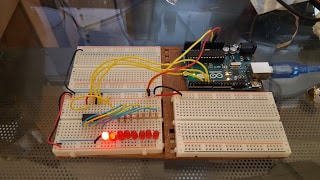 Using the 74HC595 to control 8 leds (outputs) without giving up 8 ports on the arduino uno. Three outputs from the arduino are used to shift the data out in serial to the 74HC595 were it is then parceled out to each of its individual pins. You can link multiple registers together to extend your […] 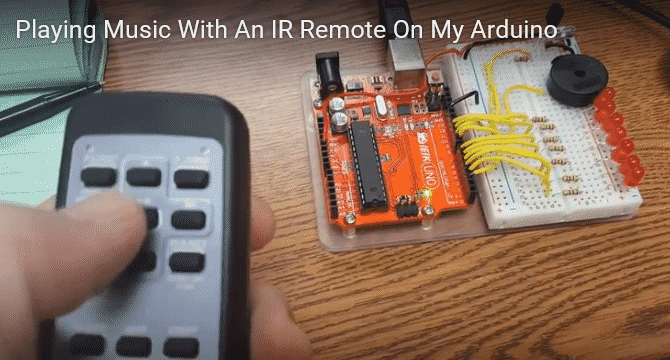 This was the first experiment I did with Ken Shirrif’s Infrared Remote Control Library for the Arduino. The circuit uses a TSOP382 IR photo sensor to receive the codes from the Clarion remote controller I had lying around. Once the code is received the program then decides which tone to play. In this example I […]